Aunt Crete's Emancipation: The Rescue of a Poor Relation 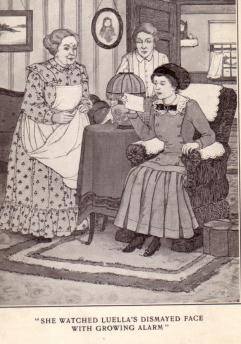 Published in 1911, Aunt Crete's Emancipation tells the story of a much-put-upon maiden aunt who finally has her day.

Miss Lucretia Ward lives with her sister, Carrie, and her niece, Luella. As Grace describes her on page one, she is "indispensable because she will meekly take all the burdens that no one else wants to bear." Carrie and Luella frequently impose on Aunt Crete's good nature and expect a great deal of the housework to be done by Aunt Crete, along with much of the sacrifice necessary to keep Luella happy and dressed in the latest fashion.

When a telegram arrives from the west with news of an impending visit from Crete's and Carrie's nephew, Donald Grant, Carrie and daughter Luella are provoked and look upon the visit as a calamity. Luella fears that his coming will "spoil her prospects" and declares that she can't "have a gawky Westerner around in the way."

Luella (and her mother, too) is worried about what people will think, supposing that "He probably never had much schooling, and doesn't know how to dress or behave in polite society...You can just imagine what a wild, ignorant creature he will be. If Clarence Grandon should see him, he might imagine my family were all like that; and then where would I be?"

As it so happens (and as I'm sure you've already guessed), Donald Grant is not at all what they suppose. He arrives, much to the delight of Aunt Crete, and gives her the love and honor she so deserves.

This almost-Cinderella story is a contrast between the selfish Carrie and Luella and the princely Donald Grant, who came to shower love and blessings upon all three of the ladies, but discovered that his love had been rejected sight-unseen by two of them.

As he lavishes his love and care upon Aunt Crete, one can't help but be reminded of our Savior's love and how often it is rejected by those who would most benefit from it.

Some backstory on why this is a bit different than later GLH books...

What you may not realize when reading this story in a modern reprint is that it's an early example of Grace's writing (most likely written well before 1910) and it was also originally a "serial" for a weekly magazine. Early 20th century serials were not known for their depth of character or detail and although this was written for a Christian weekly, quite often the stories they published were simply good, wholesome stories with a morality theme.

Remember, Grace is given credit for inventing the "Christian Romance" genre that we enjoy today and "Aunt Crete" was written before it was developed. If you read Grace's novels in date order, you are watching her create the genre, one story at a time, one character at a time. The early works are simply wholesome tales written before she began that journey.

Since "Aunt Crete" was not written as a novel, it was never intended to be novel-length. The weekly chapters were later republished together in book form by The Golden Rule Co. as a "premium" or prize for those who signed up their friends and family as new subscribers to the magazine.

A little history on caring for "poor relations" in Grace's day...

If you've read many of Grace's novels, you'll know that families mistreating their kin is a common theme, especially those who resented a relative because they were under social and moral obligation to provide for them whether they wanted to or not.

While turn-of-the-century families felt social pressure to take care of "poor relations", that is not the case today. There are many programs now that take the place of a relative's care. Remember that in Aunt Crete's time, there was no Social Security check coming each month to contribute toward meeting household expenses. Welfare, Public Housing, and Food Stamps did not exist. Nursing Homes and Assisted Living as we know them today were unheard of. There was no Medicare or Medicaid to pay for geriatric care.

An unmarried sister might find a job to contribute to the family's income or simply take the place of a paid servant in her relative's home, but a "maiden aunt"  like Aunt Crete or a widow who had no means of support either moved in with someone or died from lack of food, shelter, and medical care.

Employment opportunities were scarce for women, but even more scarce for older women like Aunt Crete. Unless she could find work serving in a household or could take in sewing or washing to support herself, she was simply out of luck. If she was ill and could not work, often her only alternative was to appeal to her relatives for support.

This obligation often made Grace's characters resent their "poor relation" because they suddenly had to stretch an already tight budget to feed, clothe, and shelter one more person. Of course, this was especially distasteful if they did not get along with the person in question for one reason or another.

Social attitudes of the day made it clear that there was no choice in the matter if the family wanted to retain their standing in the community. One simply did not put their relatives out on the street.

Today, an unwanted senior relative with no means of support might be put into public senior citizen housing or the county nursing home. Poor Aunt Crete was put into service in her relatives' home as a "doormat".

What will become of her and will Carrie and Luella get their comeuppance? You'll have to read the book to find out.

The Story Behind the Story